The original painting of “American Pride” was inspired by the tragic events of September 11, 2001.
This work was painted in memory of those who have
suffered and those whom we have lost.

1000 Limited Edition, Lithograph Prints
of “American Pride” and “American Pride II”
were signed and numbered by the artist
James Patrick Matthews.
Proceeds from the sale of these prints
were placed in a special fund for the
New York City firefighters.

In April of 2002, Patrick flew to New York City
and presented the original painting
“American Pride”
with a check from the special fund and 343 signed original lithograph prints, one for each firefighter that died that day,  to  Engine 4, Ladder Company 54, Battalion 9
782 Eighth Avenue, New York City.

This station lost fifteen men on the morning of September 11.

Blessed to be able to help:  Pat still donates several original American Flag paintings to charity events every year since that fateful day.  Proceeds from these original flag donations have raised, and continue to raise, sizable funds for our military veterans, first responders, and dozens of other charities close to Pat's heart. 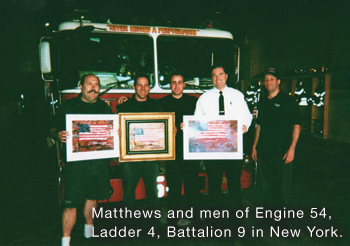 Sorry, there are no products in this collection